Druvvenrog is a recent civilization in the Third Age Deluvia. The rise of the mortals is secured because of her growth, strength and aggression.

It was Elmrif Grimstok the Druv, that was sent out from Pallamost to look for new land, and he came upon an island rich in resources. He founded the city of Druv and never sent a report back to Pallamost because he hated the pomposity of the Azernath Emperess.

It was not long after, another explorer, Aldvaderis Tarkon staked his claim on an island across a small river from Elmrif and named her city Venrog. She had been a pirate captain that was tired of life on The Long Sea, and wanted to try her luck at mining.

The two cities grew fast and other towns popped up on other parts of this mass of land. They all fought among themselves for supremacy, but then they all found that they had something in common; a disdain for the old gods, and a hatred for magery. They wanted to be the power in Deluvia now.

The heads of the burgeoning towns came together to form The Articles of Agreement of Corporate Dominion and Federation. This article is reverently called The Doxy by those in power, and most citizens refer to the government as “The Corporation”. The group of islands and conurbation of a city merged into Druvvenrog, named after the two strongest powers.

The regular citizens, employees in the many factories,  get caught in the middle between these skirmishes and wish to be left out of whatever turf war or backroom deal blows up their neighborhood block.

Druvvenrog’s expansion has alarmed the rest of the small cities in The Central Kingdoms and this news has also reached to the Outlands where those that wish to be rid of governments and wars have fled. Mages, as well, seek haven far away from these bloody Imperialists.

The citizens of Druvvenrog do love their sport, notwithstanding. Before The Great Severing, they rivaled Pallamost with the Grand Tour, which was a series of traveling battles that occurred in the largest cities of Deluvia’s arenas. Now, after the tribulations, Druvvenrog retains the only large arenas, which the masses still gather to watch these bloody mock battles.

The other sport, which The Corporation’s elite guard, The Security Enforcement Patrol Apparatus, or the secpats as they are called, or browncoats if you are one of the gangs; have tried to stamp out because of the chaos it causes is the Skiffrunner racing that occurs once a week or so in the canals of the cities. The gangs take a large part in this and consider it a neutral ground for them to work out their difference. There is much clout that is gained by the winners of these races and the betting on the outcomes has changed fortunes among these lowlifes.

The Corporation claims that the almighty coin is all that matters, not the texture of your forehead, the length of your tail or the stench of your breath, but a traveler had best watch their back when walking the streets. The Old Gods are forbidden, but since the uncovering of The Great Forge, that eternal breath from the bowls of Deluvia, the technopriests of The Corporation have tapped into this arcane furnace and scattered the Ancient Elemental Guardians that once kept this artifact safe. The deeper the miners dig the more relics of the old world they uncover, which The Upper House hide and deny. 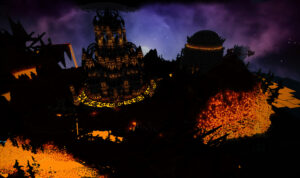