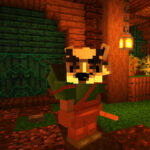 Francis Tuckles lives in Bentbuggle Burrows and has never ventured far off this little lush island of Chantwood. He lets the adventures come to him. In the evenings he is the lead lute player in his band The Wailing Banshees at Tallytuck Pub. During the day he wanders around the island finding valuables that he sells to adventurers that he crosses paths with.
Being Badger Clan has its advantages as he uses his adept digging skills to find treasures beneath the island mountains. He is not too shabby with staff weapons, his favorite being his Bō, and he’ll use it when he is grumpy and gets in a quarrel, or to defend the honor of an insulted bar maiden at the pub, which is far too often the burrowfolk will tell you.