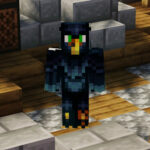 Pippin Scrawsbeak was kicked out of the main order of Mages and broke off of the Raven Clan to form his own school of magic. He and his cousins moved into the old, almost abandoned Magewood to build his forces. The rest of Song Tide don’t really know or don’t really care about his rumblings as they know when it comes down to it, he will always stand up for Song Tide’s values.
You will some times see him and his new Clan flying circles above what he now calls Pippinsnest